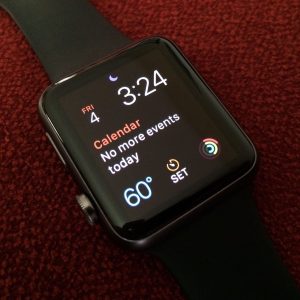 As fate would have it, by the time I got around to writing a review of the Pebble watch I’ve been using for a year, I go out and get an Apple watch. You might be asking yourself “how in the heck did that happen?” Or, you might be thinking, “just tell us already.”

Well, like most people, I was just sitting around looking for deals on Craigslist. When suddenly, I came across an ad from a guy wanting to sell his Apple Watch. Not only did he want to sell it, he wanted to sell it for cheap. After a quick consultation with the wife and a few short emails and text messages with the seller, I was on my way to pick it up.

After I spent some time getting it set up, updated, and connected to my iPhone, I was ready to roll. From the start, I immediately noticed that the build quality of the Apple Watch was far superior to the Pebble Classic. It also integrates better into the Apple ecosystem as you might expect. But, to be fair, the Pebble Classic came out about two years before the Apple Watch was even announced. Therefore, it’s not exactly fair to compare these two items as equals. Instead, I’m going to spend this time telling you what I like about Apple Watch instead of telling you what I don’t like about Pebble.

The model I purchased is the Apple Watch Sport. It’s body is milled from an aluminum alloy and is anodized with a dark gray coating. The watch band is black and is made of a poly-elastomer material. It’s comfortable to wear and great to look at.

With watchOS 2, Apple Watch received a host of new features. Most notable was offering app developers the option to include customized complications. Complications are tiny bits of information that can be added to the watch-face. They include things like weather, stock prices, and calendar events.

Having the ability to customize the watch-face is what I like most. With a quick glance I can see the time, date, temperature, or even look at my next upcoming calendar event. When I touch one of these areas, I am whisked away to the appropriate app to even more information.

Overall, I am very pleased with this device and do not regret my purchase. If I had paid full price, I may have not have felt the same way, but I got a deal and am making the most of it. Because watchOS 3 is currently in development and new hardware may soon be on the way, I am confident that apple Watch will become even more appealing those who have yet to buy one.