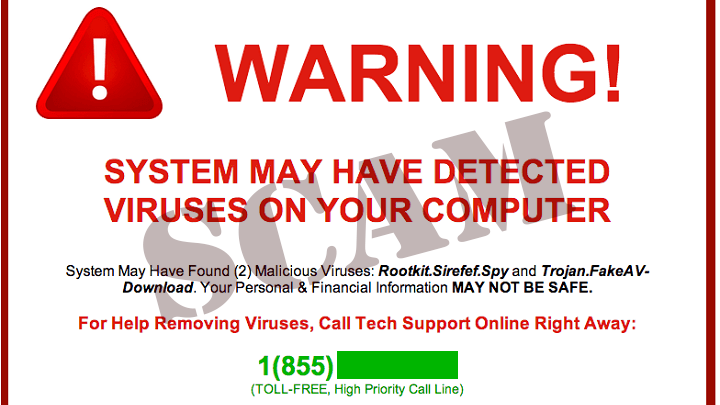 I hoped I wouldn’t have to write this, that if I didn’t mention it the scammers would just go away. Well after last week, here I am, writing this post. If you don’t want to read the whole article, read just this next part, I’ll make it easy:

DO NOT call a tech support number that pops up on your computer or device!

DO NOT take a tech support call from someone you do not personally know or recognize!

Last week an extended family member called me in desperation. They had a very realistic screen on their computer (not the one pictured here) saying Microsoft had found spyware and trojans on their computer and that they needed to call the phone number immediately. They couldn’t do anything to make the screen go away and were convinced there was an issue (hint: If you get one of these screens on a Windows computer, pressing Control-Alt-Delete will bring up a menu that will let you log off).

So in a moment of despair and confusion, they called the number and were connected with Alex Martin, a “Level 3 Tech”, from “Microsoft”. He quickly convinced them that the computer was infected with 2,354 spyware and 1,356 trojans, but he could help. He then connected remotely into the computer and spent nearly an hour looking around the computer, showing my family member “how bad it really was”.

After about an hour he started asking them for money, saying it would be $100 to “fix” everything, even giving them his direct phone number in case they got disconnected (I tried calling the number this morning and got an Indian gentleman who sounded very confused when I asked for Alex Martin). This is the point where my family member started to realize what had happened and eventually disconnected from the call and the remote connection. Then they restarted the computer and were unable to get it working.

That’s where I came in. We talked through what had happened over the phone and I suggested that we might just have to throw it out the window. The computer is getting older, but the thousands of pictures recently taken and not backed up were more of a concern. The next day they brought me the computer and I started looking at what had been done. “Alex” had activated an obscure Windows lock feature, attempting to take the computer “ransom” until they paid money.

Luckily, and I do mean that, I was able to circumvent this lock and get back into the computer. I then spent a lot of time analyzing the computer and doing scans to make sure there wasn’t anything else he had done while he had full access. I have no idea why they didn’t do more to the computer; if I were them, I would have. If this happens to you, don’t assume that you will ever be able to use your computer again, even with my skilled attempts. If they have remote access to your computer they have access to any saved passwords and any file on your computer. They will also often install their own spyware, giving them access in the future.

If you ever see something like this and aren’t sure what to do, please contact me, here or through my IT business www.ConsistentTech.com. Like I always say, “My business is giving free tech advice. I make money when you don’t listen!”

But why would people do this? Because they make money catching people off guard. If they didn’t they would find another scam, but this one is working. It’s 2018 – I think we have all realized by now that not everyone on the internet is a saint. How did they do it? From what I can tell my family member had done a Google Search for Amazon and then clicked on one of the ads at the top of the search which they thought would get them to Amazon. However they do it, that ad had been directed to a malicious website, which took over the screen and seemed to lock the computer.

What can you do to protect yourself?

My family member got very lucky. They didn’t have banking information saved or business info on their computer. The bad people could have been much worse as well. Be safe out there, there are some real jerks on the Internet.