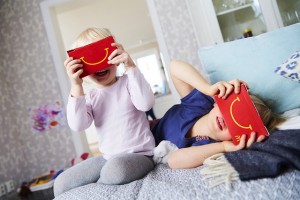 Earlier this week we discussed Virtual and Augmented Reality on Episode 10 of the podcast. I really feel that these technologies are going to get a lot of attention in the near future, there has been talk of virtual reality for a long time, but the hardware and software has developed to the point where a great experience can be achieved. So I can’t say that I was totally surprised to see that McDonald’s is getting into the game.

This last Monday, McDonald’s Sweden announced that they would be doing a special two weekend event in which the popular Happy Meal boxes would convert into virtual reality viewers. The concept is not new, in fact it is very similar to the Google cardboard viewer that I own. They are also releasing a special 3D virtual reality skiing game called “se upp i backen” (in English that means watch out on the slopes) to go with the device.

The product does need a smart phone, but that is the great thing about this entry-level option, there is a good chance you already have a smart phone which can take care of the needed computing power, you just need a device to format it in an immersive experience.

From the press release:

To celebrate the 30th anniversary of the Happy Meal in Sweden, McDonald’s Sweden has developed Happy Goggles. By re-folding the Happy Meal box, customers can create a pair of Virtual-Reality glasses which makes it possible to experience Virtual Reality with a smart phone.

McDonald’s continually tests new ideas and, with Happy Goggles, Virtual Reality (VR) becomes available to everyone. Happy Goggles are a test designed to modernize the Happy Meal and provide a digital experience in addition to the physical toys usually found in the box.

On the Happy Goggles website they also say that they are only being tested in Sweden now but plan to roll them out to other countries soon. You can watch the video explaining the project below:

I just read an article Dave sent me today that says two-thirds of consumers don’t realize this technology exists. I think with projects like this that will change very quickly. Have you tried Virtual Reality? Let us know in the comments below or on Facebook or Twitter.