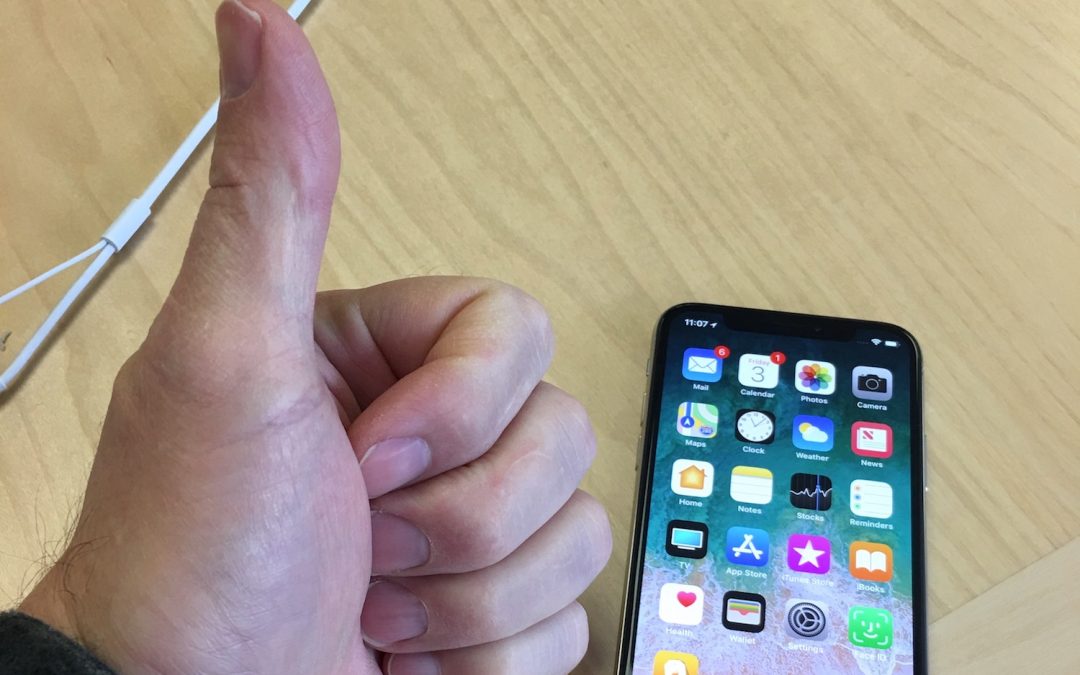 Along with millions of other devoted iPhone fans, I ordered my iPhone X last Friday morning, sight unseen. I’ve been eagerly awaiting it’s release since it was first announced by Tim Cook at Apple’s annual iPhone event this past September. Sadly, my order isn’t expected to arrive within the next couple of weeks, but I just had to see this device in action. So, I headed to the Apple Store this morning to see what all the hubbub is about.

Without too much fanfare, I entered the moderately full Apple Store and was able to immediately walk up to the iPhone X demo table. Waiting for me there was the silver iPhone X. What a beautiful piece of hardware. The shiny chrome band around the outside of the phone is just incredible. Why don’t more device manufacturers use chrome-like parts anymore? Such a classic style that fuses a timeless look on top of a state-of-the-art, hand-held supercomputer.

I also picked up the space gray version of the phone. Honestly, I was unimpressed. It’s not dark black like the jet black iPhone 7, which is cool. Instead, it’s a kind of off blackish gray color that looks kind of drab to me. But, for many, it will be the only option to consider. Go on, live in your boring, colorless world. I won’t stop you.

Speaking of color, how could I talk about iPhone X without mentioning the screen? It has rounded corners, a weird notch at the top and nearly covers the entire front of the device. As if that wasn’t enough to make it stand out from previous iPhone models, the type of screen technology it uses is OLED instead of the standard LCD panel used in every other iPhone to date.

At first glance, the screen appeared to have more saturation and contrast than that of my iPhone 6s Plus. That was to be expected because OLED displays excel in these areas. However, there was also another observation I made. The pixels of the iPhone X seem bigger and more noticeable than those of typical LCD retina displays. Maybe it’s because I’m used to looking at LCD displays, or maybe it’s because my nearsightednesses allows me to focus my eyes within a few inches of my face, but they were certainly more noticeable to me. Your mileage may vary.

An edge-to-edge display also means that this phone lacks the familiar home button. In the short time I had to use the device, I honestly did not miss it. It was easy to move in and out of apps with a simple swipe up from the bottom. I actually preferred the swipe gesture and it just felt natural to me. My brain made the adjustment to all the new touch gestures almost immediately.

Overall, I really like iPhone X. This is the phone I’ve been waiting for. The screen is larger and the body is smaller than the typical “plus” sized phones. It’s fast, the interface is smooth and it feels really nice to hold in your hand. This phone has personality and I can’t wait to get to know it better.